What Is Raw Honey? 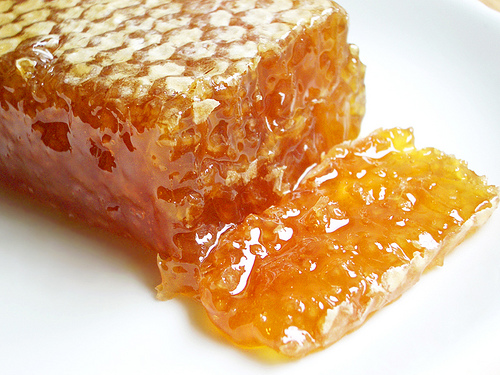 One of the oldest foods in the world, honey was first farmed by the Egyptians almost 3000 years ago. Due to its delicious properties and scarcity, it was regarded as sacred. For the majority of time it was used in traditional holy ceremonies such as embalming and paying tributes to the gods. With time the medicinal and culinary properties were discovered but only the wealthy could however afford it, as it was extremely expensive.

What is raw honey?

Raw honey most certainly is not the honey so readily available on your local supermarket shelf. When honey is extracted from the honeycomb, it is in its purest form. It has never been heated to more than 105 degrees Fahrenheit, strained or filtered. Excessive heat must be avoided in order to preserve all the nutritional elements (enzymes, vitamins and minerals) in raw honey which aid good health.

Commercial honey has been pasteurized (heated and rapidly cooled), partially killing the yeast cells and the enzymes in the honey which are important for the activation of minerals and vitamins in the body. Raw honey is an alkaline forming food which means the honey does not ferment in the stomach, neutralizing acid indigestion.

When honey is filtered and processed, many of the beneficial phytonutrients such as pollen and enzymes are destroyed. Raw honey is rich in amylase, an enzyme found in the pollen of flowers which aids the digestion of carbohydrates found in starches like bread and pastas.

How is honey produced?

It is common knowledge that honeybees produce honey. How do these industrious little creatures go about their business of producing the sweet golden liquid enjoyed by thousands on toast or as sweetener in their favorite hot beverage?

Honeybees collect nectar, a sugary fluid, from flowering plants by using their tongues which are shaped like a tube. The extracted nectar is then stored in the additional stomach of the honeybee, also known as the crop. Here the nectar mixes with enzymes, changing the chemical composition and pH of the nectar which essentially makes long-term storage of the nectar possible.

When the honeybee gets back to the beehive, a process known as regurgitation follows. This is a process whereby the nectar is passed on to one of the other bees by regurgitating the nectar into its mouth. The regurgitation process carries on until eventually the nectar, still not wholly digested, is dropped into the honeycombs’ wax cells, hexagonal in shape.

As the nectar in the honeycomb is in liquid form, the bees now go about the business of getting rid of all the extra water in the nectar. Using their wings they now start to fan the honeycomb, speeding up the evaporation of the excess water. Once most of the water in the honeycomb has evaporated, the honeycomb is sealed by the honeybee by means of an excretion of liquid in its abdomen. Once this liquid sets, it is known as beeswax and the process of producing honey is complete. When honey is stored in a manner which protects it against water and air it will remain good for an indefinite period. Bees are now provided with the perfect food during those cold winter months. A colony of bees can eat between 120 and 200 pounds annually.

Honey is generally available in liquid, comb and cream forms.

Liquid honey is readily available in both raw and pasteurized forms, and familiar to most consumers. Liquid honey is a popular choice for baking and cooking purposes.

Raw honey is extracted from the honeycomb by using a centrifugal force. The extracted raw honey now undergoes a filtering process which removes air bubbles, fine particles and pollen grains. The filtering process varies in degrees as it depends on the supplier and/or packaging company.

Comb honey is a bit more difficult to find these days. In days long gone by, this was the most common form in which one could buy honey, as the extraction process was not yet known. Comb honey is taken from the beehive in sections, and is pure raw honey as the honey is not subjected to any form of processing. If lucky, one may find a piece of honeycomb added to a jar of liquid honey with quite a hefty price tag attached to it.

Cream honey is known by names such as honey fondant, spun honey, whipped honey or granulated honey. What makes cream honey particularly popular is the fact that is not as messy as liquid honey. Its smooth consistency makes it drip free and it spreads like butter.

Creamed honey is actually crystallized honey. Prepare your own by adding one part very fine granulated honey to nine parts of liquid honey, and mix well. Store the mixture is a cool place (about 50 degrees Fahrenheit) for a few days to a week.  The cream honey is ready once you tip over the container and it does not flow. Stirring the mixture will make it flow again though.

After granulation honey is lighter in color, hence the reason why creamed honey usually appears opaque in color.

Largely depends on the source of the nectar honeybees collect. Generally speaking, those honeys light in color have a mild flavor, the darker honeys usually have a strong flavor.

Considering how the inherent goodness of raw honey is destroyed when it is subjected to excessive heat and filtering processes, it is vital to check the product and the label before purchasing raw honey.

Raw honey is opaque in color and has a crystallized texture due to pollen and unfiltered material it contains.  Because raw honey is quite solid at room temperature it will, when the container is turned upside down, flow much slower than processed honey.

Generally labels on raw honey will mention that the honey is unheated, unpasteurized or unfiltered. Chances are if this is not mentioned, it isn’t raw honey.

As is the case with quality wine, raw honey also becomes finer with age. When stored in airtight containers it will not spoil. When containers are left open, the honey will still keep fresh for many months. The honey will however eventually ferment, but not get spoiled. While fermentation serves to enhance the many benefits found in raw honey, the taste may be altered and not be acceptable to all.

Raw honey is most probably the most superior form of sugar. Even so, when eaten in excessive quantities, it could negatively impact blood sugar levels which may lead to other related health issues. Consumed in moderate quantities it is a healthy and nutritious substitute for refined sugar and delicious in food. Read more on the health benefits of raw honey…

Any other thoughts on raw honey? Feel free to share with our readers. Just drop us a comment below…

Hitting A Weight Loss Plateau: Tips For What To Do When You Stop Losing Weight

Potty Training: Scared Of The Potty

Colleges are Failing, and Yours Could be Next

Rewarding Children with Food – This Is A Bad Habit

In: Kids Health
View All