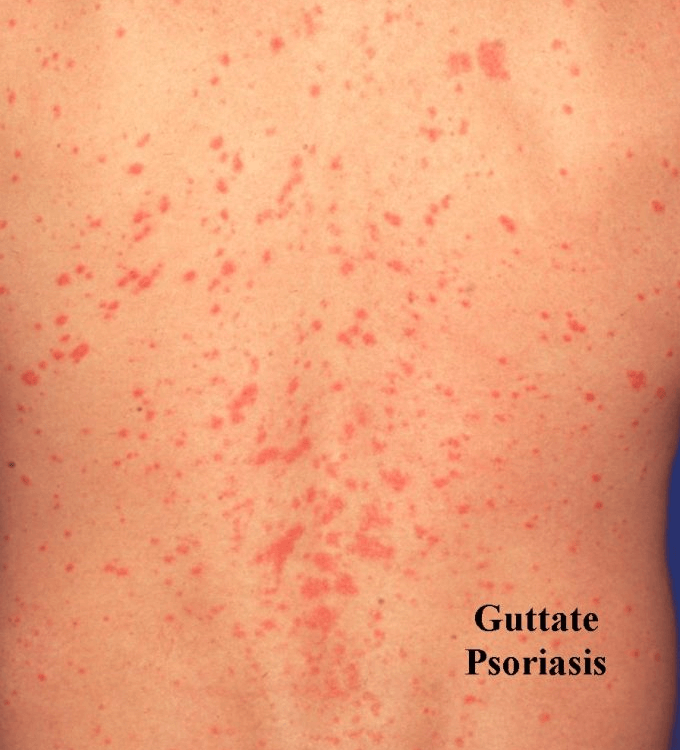 What is Guttate Psoriasis?

According to the National Psoriasis Foundation, about 8% of people living with psoriasis, develop guttate psoriasis.

It is also known as “drop shape” psoriasis.

Guttate psoriasis is identified by numerous drop-shaped small red scaly spots which are spread over the body which may itch a little bit but are not painful.

The areas of the body generally affected are the tummy, chest, thighs, and upper arms.

On rare occasions, it may spread to the face, scalp, or ears. The palms of hands and soles of feet are not known to be affected by this type of psoriasis.

Guttate psoriasis is much more common in children and young adults. It usually develops between the ages of 10 and 30 and is likely to be equally common in men and women of all races.

In children, this condition often resolves on its own within a few weeks.

In adults, the condition is usually different: they have recurring problems.

For some people, guttate psoriasis is considered an initial symptom of the more common form of psoriasis (psoriasis Vulgaris).

However, it is still unknown how many people with guttate psoriasis will actually develop psoriasis Vulgaris later.

Guttate psoriasis is not contagious and does not cause any scarring.

Guttate psoriasis can develop just like that, but it is more often associated with a throat infection (about 80% of cases) with bacteria of the group A beta-hemolytic streptococci (Streptococcus pyogenes). The throat infection usually occurred 2 to 4 weeks prior to the appearance of the rash.

Another cause is the use of beta-blockers such as Inderal (propranolol) usually prescribed for high blood pressure and heart disorders such as irregular heartbeats (Cordarone, Lanoxin) and after heart attacks.

When people with a genetic predisposition to psoriasis are infected with this bacteria, they get a type of fever rash. This rash then progresses to guttate psoriasis.

Guttate psoriasis can also develop after the use of certain antimalarial medications (Plaquenil and Aralen).

Other triggers include stress (physical or emotional tension), tonsillitis (infected lymph nodes called tonsils found at the back of the throat), and a skin injury such as a cut, burn or scrape.

In children, outbreaks may be triggered by a viral infection such as rubella, chickenpox, and roseola.

Who Can Get Guttate Psoriasis?

Guttate psoriasis can affect anyone, including people who have never had psoriasis before. It is, however, more commonly affecting children and young adults younger than 30 though.

More often this form is seen in people predisposed to psoriasis, with psoriasis running in families.

What Does Guttate Psoriasis Look Like When It Starts?

Within a short time, dozens to hundreds of small (1 to 10 mm) round to oval red scaly bumps or spots appear on the trunk and limbs. These spots very rarely appear on the face and scalp.

The spots are not painful and do not cause you to feel ill or feverish but sometimes cause itching.

The lesions are not as thick as those found with plaque psoriasis.

Read more about some of the other symptoms associated with guttate psoriasis. 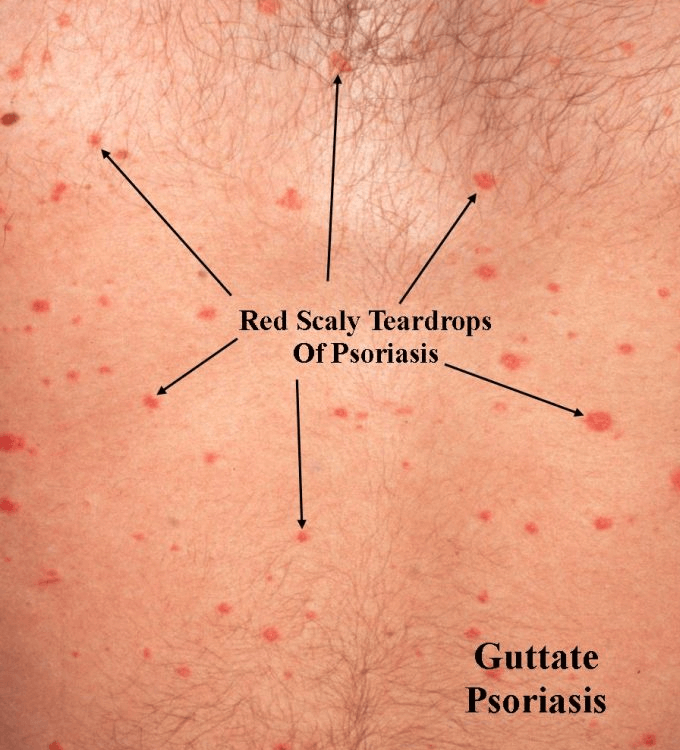 When you suffer from a sudden outbreak of drop-like spots visit a doctor or dermatologist. Dermatologists specialize in diagnosing and treating skin diseases.

The clinical appearance of the rash pretty much is how guttate psoriasis is diagnosed.

Your doctor will most probably inquire about throat or any other infections that you may have had recently.

A skin biopsy and a throat culture may be performed to determine if an infection is the cause of the outbreak. If an infection is found to be the culprit, a course of antibiotics is prescribed. The spots, however, do not necessarily disappear quickly.

The doctor may also inquire about medications you’re taking as there are some that have been found to trigger guttate psoriasis.

The doctor may opt for a blood test to make sure the condition is not something else such as dermatitis or eczema.

Guttate psoriasis often clears away in a few weeks to a few months without any treatment.

There are however times when treatment will be necessary.

Not seeking medical treatment may cause symptoms to become severe. The more severe the condition gets, the more difficult it will be to treat. A chronic health condition may then develop.

Antibiotics are prescribed when test results show a streptococcal infection.

How to Treat Guttate Psoriasis

The mild form of Guttate Psoriasis

In the mild form, small, isolated spots are visible that generally affect about 3% of the skin.

It is generally sufficient to apply a topical corticosteroid cream or ointment since corticosteroids counteract inflammation and reduce itching. This local treatment works well and has few side effects.

Applying Vitamin D ointment or a combination of these (betamethasone calcipotriol) daily. Vitamin D inhibits inflammation and is often given in combination with corticosteroid treatment.

An oil-based cream helps in keeping the skin supple.

Get into the habit of applying the topical creams/ointments after your bath/shower to lock in moisture. Remember, water dries out your skin. Keep your skin moisturized to reduce itching, especially in winter.

This stage of guttate psoriasis covers more or less between 3% and 10% of the skin.

As with the mild form of guttate psoriasis, initial treatment should be to apply a topical medicine directly to the lesions to bring relief from the itchiness and also to moisturize the area affected by the lesions.

In severe cases, 10% or more of the skin is covered with these red spots. In some instances, the whole body could be covered.

This stage is associated with many itching complaints and topical medication application over a large area of skin is not very practical.

In the severe form of guttate psoriasis, treatment often consists of light therapy with UVB rays.

Ultraviolet B light is part of natural sunlight and affects both cell growth and inflammation in the skin. Total body lighting with narrow-spectrum UVB rays is the best option. The success rate is quite high and the treatment has few side effects.

On rare occasions, guttate psoriasis proves to be resistant to antibiotics and light therapy. Systemic medications may then be prescribed to treat the condition.

Psoriasis is visible in childhood in 1 in 3 people with the condition. The spots, which are usually on the face, are often flatter than in adults but are itchier. Children often also have sleeping problems because of the symptoms. The treatment is much the same as for adults, but with a little more caution.

How Long Does Guttate Psoriasis Last?

If you regularly suffer from guttate psoriasis as a result of inflamed tonsils and your tonsils are enlarged, then you should have it surgically removed (tonsillectomy). This way, flare-ups will return less quickly.

Guttate psoriasis, just as other psoriasis types, usually improves during the summer months, but worsens again when winter sets in and causes the skin to dry out.

Can Guttate Psoriasis Be Cured?

No cure for guttate psoriasis exists.

Guttate psoriasis treatment is mainly aimed at relieving symptoms as you will never be completely cured of the condition.

It is therefore strongly advised to learn what triggers an outbreak so you can take the necessary precautions to limit any flare-ups of the condition.

How to Prevent Guttate Psoriasis Outbreaks

If you, however, still suffer from new outbreaks, the following guttate psoriasis management tips can help:

Some people have a singular outbreak that comes and goes.

For those who carry the streptococcal bacteria in their respiratory system, flare-ups may recur with every throat infection.

For other people still, it is the start of a lifelong condition that may evolve into plaque psoriasis.

Before installing your windows, you should understand the key elements of your new window Because windows are the last line of defense against water damage, they need to be installed by a trained professional Wood windows require regular maintenance …Read more END_OF_DOCUMENT_TOKEN_TO_BE_REPLACED