By: WellSelf Team
In: Facial Psoriasis 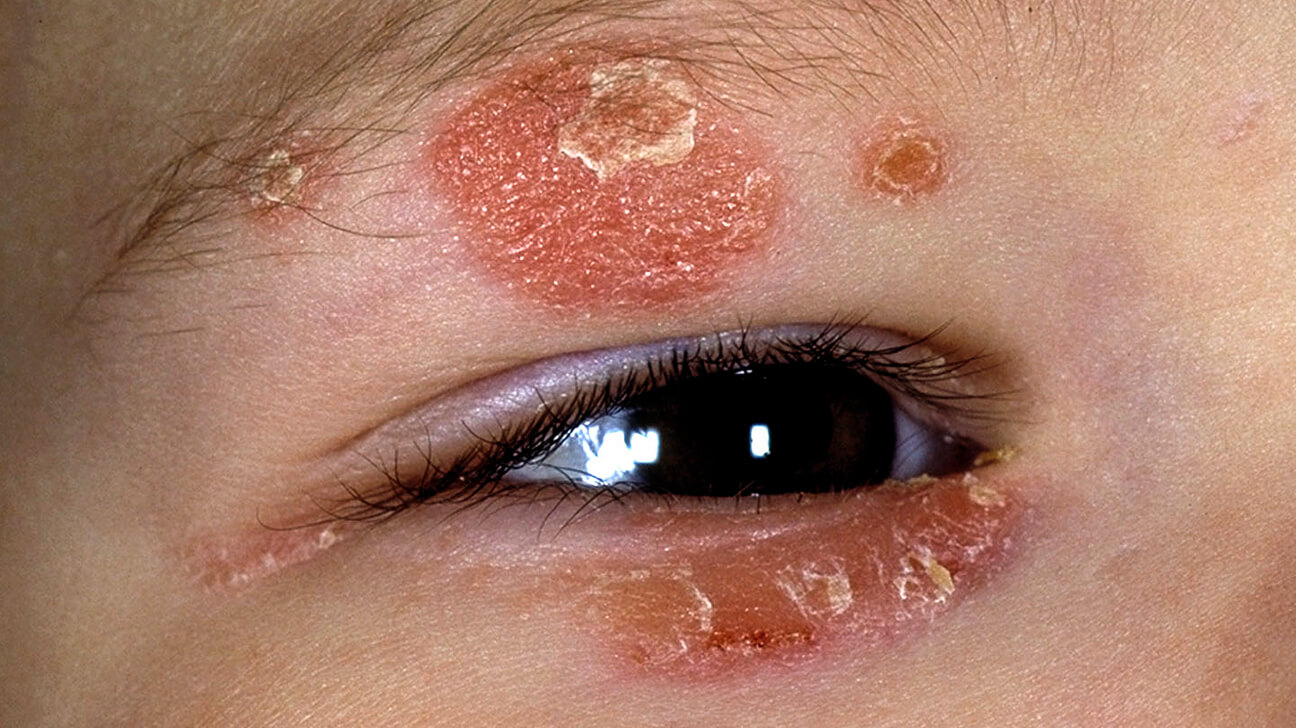 What is Facial Psoriasis?

Facial psoriasis tends to have emotional effects on patients in addition to the general noticeable psoriasis symptoms, as facial skin is difficult to cover.

Very often the hairline is also affected and marked with visible plaques. For these reasons, facial psoriasis is experienced as particularly stressful. Facial psoriasis tends to appear on the face on eyelids, around the eyes, ears, and mouth but is not limited to these areas.

This type of psoriasis is different from other parts of the body mainly because the skin on your face is thin and sensitive. This makes your skin much more vulnerable to psoriasis treatments and must be handled with care.

Facial psoriasis can often be seen around the eyes, nose, and upper lip. Psoriasis can also be found on the forehead and around the hairline which is typical of scalp psoriasis.

Sometimes the red patches with dry or greasy flakes are mistaken for eczema. In contrast to psoriasis, eczema at the hairline rarely itches. You should therefore always consult a doctor for an accurate diagnosis of psoriasis. 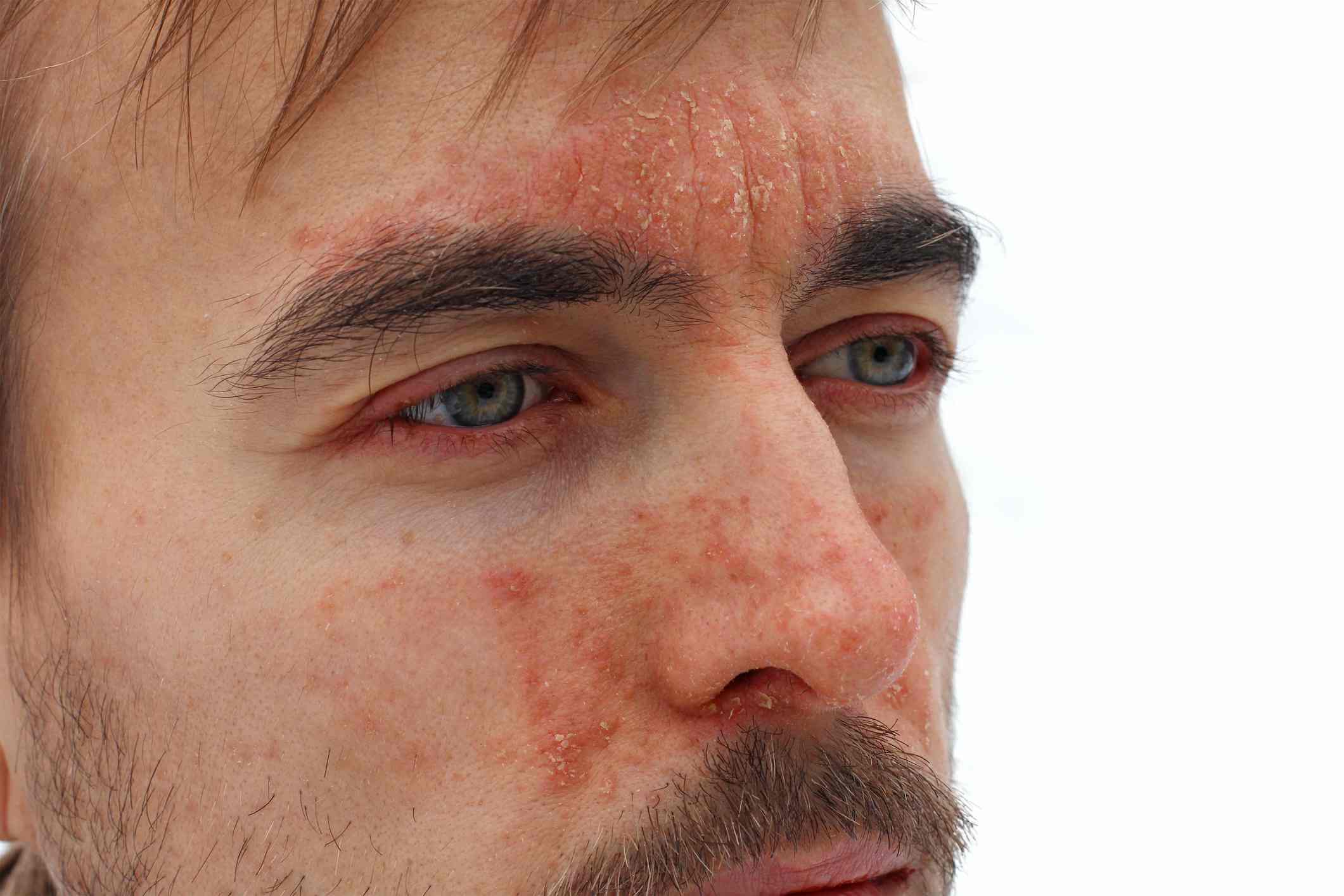 Since psoriasis is a chronic skin condition, no cure has yet been found. So it will have to be treated to reduce it, but it will never go away completely, unfortunately.

The biggest part of the problem is that we do not know the exact cause. Facial psoriasis can cause different symptoms as it mainly depends on where exactly on your face you have the psoriasis outbreak.

When you have eyelid psoriasis, you can have flakes in your eyelashes, it can cause red crusted edges of the eyelids, and these edges can also become irritated. It can make your eyes inflamed and you can even develop vision problems.

At the mouth, you may have white and gray patches on your gums, tongue, inside of the cheek, inside the nose, or on the lips. The spots are especially very flaky and this accumulation of the skin flakes causes inflammation and irritation.

When the ears are affected, scales that build up can block the ear canal and cause hearing loss.

Facial psoriasis symptoms do not differ from the typical psoriasis plaques that develop on the other parts of the body. However, the skin on the face is more exposed to light, wind, and other environmental influences, making it more irritated, reddened, or flaky.

In addition, the facial skin is thinner and more sensitive than on other parts of the body; an aspect that must also be considered when treating with certain medicinal substances. 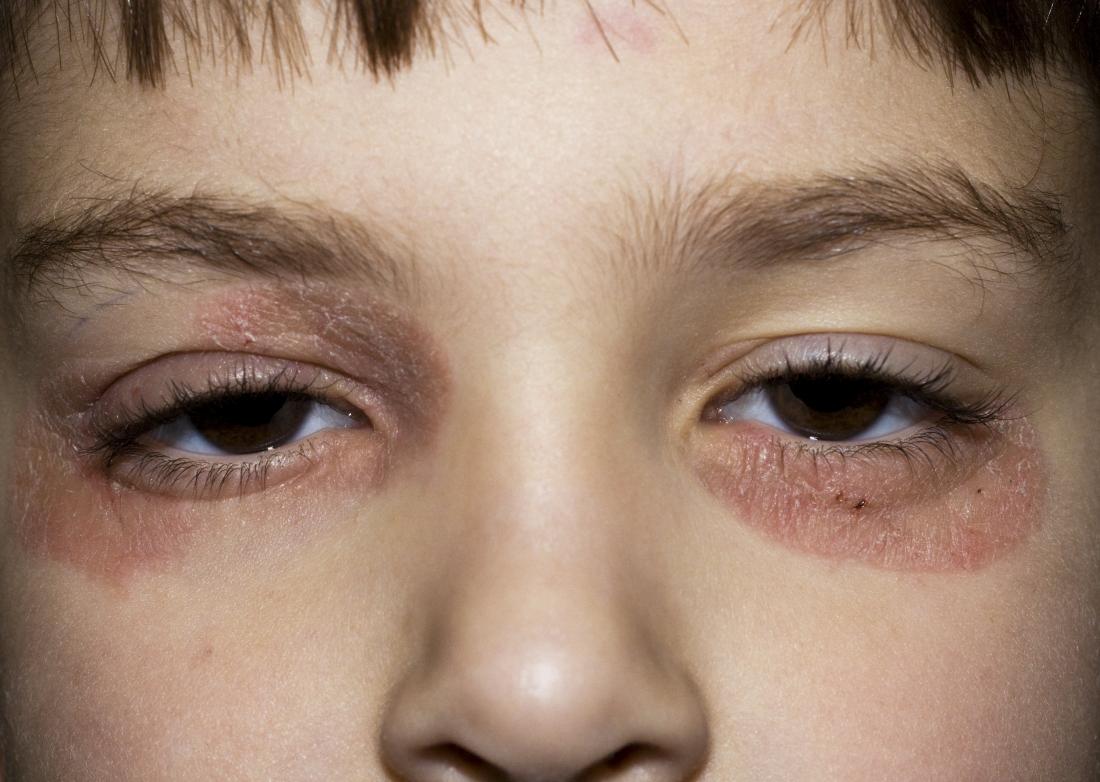 The real cause of facial psoriasis has not yet been determined, but there are factors that can contribute to making your psoriasis worse.

There is no cure for psoriasis, irrespective of which part of your body is affected by the disease.

Any active ingredient, ointment, tincture, or mask is absorbed more strongly by the skin on the face because there the skin is thinner than on the rest of the body.

Always keep that in mind.

That said, regular and good skin care is particularly important in treating facial psoriasis. The following applies: the drier the skin, the richer the skincare should be.

Good skincare for psoriasis can make a difference, especially on the face. It is best to seek advice from a pharmacist.

Choose skincare products that have as few different ingredients as possible, because everyone can be irritating. You can also find out more easily which ingredient suits your skin best. It doesn’t necessarily have to be a special face cream.

Whether aloe vera can treat psoriasis on the face is definitely worth trying.

You can use the pure gel from an aloe vera plant as well as one of the many aloe vera creams. With the latter, you should ensure that the percentage of aloe vera is as high as possible, and also that preservatives have not been used too generously.

In health food stores or in pharmacies, for example, you should get good advice.

Facial cream containing urea is also a way to address psoriasis on the face.

However, urea can irritate the facial skin more than the skin on other parts of the body, so you shouldn’t use a cream with a urea percentage higher than 3 or 5%.

Mahonia aquifolium aka Oregon grape or barberry has anti-inflammatory properties which have been found to reduce the redness in flare-ups of psoriasis.

These cannot cure psoriasis, but go a long way in easing scaling, dryness, and itching of the skin.

According to the National Psoriasis Foundation, some of the best lotions and creams based on dermatologist recommendations are:

Lotions and creams are not to be used as substitutes for facial psoriasis treatments prescribed by your doctor. They are, however, effective to combat some of the symptoms like flaking and itching.

Ointments are mainly used because your skin is thin and can absorb the ointment well.

Often you will be prescribed a hormone ointment by the doctor or dermatologist and you will also have to use a non-medicinal cream. It is very important that you are careful with hormone ointments around your eyes and use a different ointment for close to your eyes.

Cortisone creams or ointments are very unsuitable for the face. Doctors see there the danger that the skin becomes thinner (“atrophy”) or other skin diseases such as rosacea or steroid acne are triggered.

According to pharmacists, this very light form of cortisone can be used well on the face. It is freely available in low doses. A concentration of no more than 1% is recommended. All stronger cortisone ointments involve greater dangers.

These drugs are essentially approved for eczema and not for psoriasis.

Many dermatologists, however, recommend or prescribe the active ingredients tacrolimus or pimecrolimus for psoriasis on the face.

In the experience of medical professionals, they work on average after two weeks. Up to 50 percent of patients have noticed a significant improvement or even complete healing of the symptoms after 6 to 12 weeks.

These should not be used long-term.

The active ingredients in vitamin D preparations are called, for example, calcipotriene (Dovonex and Sorilux) or calcitriol (Rocaltrol and Vectical).

Although these may slow the growth of skin cells, they may have the side effect of irritation of the skin.

In the case of vitamin D3 preparations, doctors warn of “local adverse drug effects”. But: They are “possible in principle”. The irritation passed. If they are too severe, the dose can be reduced temporarily.

Any internal medication can relieve psoriasis on the face as well as the rest of the body. Some of these include, but are not limited to:

The drugs discussed are to be taken as prescribed by your doctor. Any side effects must be reported to the medical practitioner and stop taking the drug immediately.

Phototherapy is a treatment making use of UV (ultraviolet) light. This treatment ultimately slows down the growth of skin cells and is available in different types.

How Can You Help to Treat Facial Psoriasis?

You too can do some things in addition to the treatment prescribed by the doctor or dermatologist to assist in making sure your psoriasis gets better.

Firstly, you can ensure that you are less stressed. Start a hobby or exercise more. Spend time with loved ones or friends as much as possible

It is also important that you avoid triggers such as smoking  (quit).

Limit alcohol consumption as much as possible.

Make sure you keep your nails short so that you cannot scratch the spots> You can use a cold compress to reduce the itching or apply moisturizer to the itchy spot. Use a good moisturizer that ensures that your skin does not dry out.

Answers to some frequently asked questions:

Is facial psoriasis only seen in combination with other types of psoriasis?

Facial psoriasis can stand alone as the only form of psoriasis on your body, but it is more common in combination with other parts of your body. Caution is advised when treating your face. This is because your skin there is much more sensitive and thinner than on the rest of your body.

Where is facial psoriasis found?

Facial psoriasis can often be found in the eyelids, nose, ears, and mouth. When you have it on your eyelids and around the edges of your eyes, it can also cause inflamed eyes that could worsen your vision. You may even develop gray and white spots on your gums or tongue and if you see this, it’s a good idea to see your doctor.

Is the cause of facial psoriasis known?

For now, the theory is that psoriasis is caused by genes and the immune system. Often if there is a family history of psoriasis, it is hereditary if you get it. In addition, factors such as smoking, alcohol, viruses, and certain medications can worsen psoriasis but are not the cause.

Can facial psoriasis be treated easily?

Psoriasis on the face can be treated relatively well as your skin is thinner on the face. Because the skin is a lot thinner, prescribed ointments will penetrate the skin much more easily and do their job better. It is also possible to take tablets, although working with a good ointment is a much easier way of treatment.

It is certainly possible to help reduce psoriasis on your own. It is important that you keep your skin subtle and this can be done by applying a moisturizing cream. You should also avoid things like cigarettes, alcohol, and junk food. Also, cut your nails short to avoid scratching.

Researchers conduct many clinical trials to identify causes, risk factors, and treatments of psoriasis. As they continue to learn about the disease, hopefully, they will develop new ways to treat facial psoriasis.

In 2020, a national student financial wellness survey uncovered shocking truths about college student struggles More than half of respondents showed signs of food insecurity while over 10% had experiences with homelessness Worries about food and …Read more END_OF_DOCUMENT_TOKEN_TO_BE_REPLACED