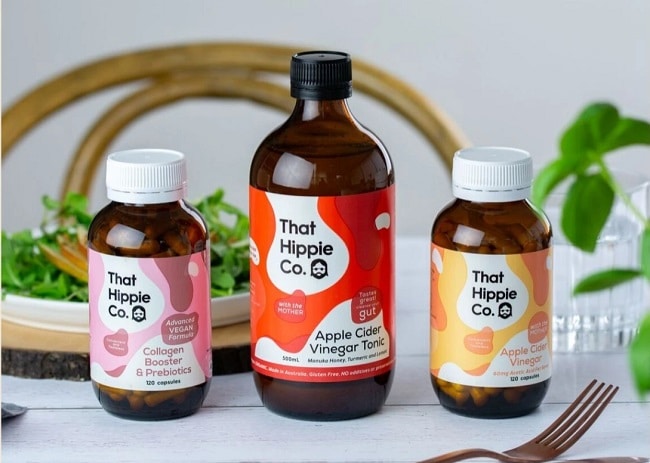 What is apple cider vinegar anyway?

Vinegar has been an integral part of the human culinary culture for many thousands of years. It was already used in ancient Egypt to make food tasty and long-lasting.

We probably owe his discovery to bad luck. It was probably a mistake in alcohol production that made a pitcher of badly covered wine sour. The vinegar was already born, and chefs from different cultures began to use it for their dishes.

What hasn’t changed from then until now – vinegar is an important ingredient in many recipes and belongs in the range of every well-stocked kitchen. Apple cider vinegar, in particular, impresses with its pleasant taste.

At the beginning of its production, the vinegar is still simple apple juice. The fructose in the juice is fermented with the help of yeast and bacteria to acetic acid. This is how the vinegar gets its characteristic, sour taste and intense smell. Acetic acid also has many health benefits. Most of the people now use apple cider vinegar capsules for easier handling and better benefits.

Apple cider vinegar is produced through the targeted fermentation of apple juice. The resulting acetic acid is responsible for its health-promoting properties and characteristic taste.

Type 2 diabetes is one of the most common preventable diseases in the world. In 2015, as many as 7.2 % of adults were affected by type 2 diabetes.

Nutrition plays a central role in the development of diabetes. If the body is exposed to masses of calories, fat, and sugar for an extended period, it loses the ability to regulate blood sugar levels properly. Insulin resistance or insulin deficiency gradually develops.

But it is also important for healthy people to pay attention to a stable blood sugar level. In this way, sleepy phases after eating can be avoided, and the body has enough energy to master the day in a relaxed manner.

According to another study, anyone who consumes two tablespoons of apple cider vinegar before going to bed shows a four percent lower blood sugar level the following morning.

Further studies confirm the positive effects of vinegar on blood sugar levels. Just about everyone benefits from this effect, which makes apple cider vinegar particularly healthy.

If you want to lose a few annoying pounds, apple cider vinegar is the right place. Research shows that vinegar can prolong the feeling of fullness.

It was shown that the participants in the study consumed up to 275 fewer calories a day. In the long term, this is a lot and helps tremendously in achieving visible weight loss results.

Meals are taken with apple cider vinegar prolonged the satiety of study participants. The result: less food was eaten during the day, thus saving calories.

Vinegar can also have healthy effects on the skin. It is particularly well suited to fight bacteria and fungi.

This application has a tradition. Vinegar has long been used to treat nail fungi, lice, warts or ear infections.

Hippocrates used vinegar to disinfect wounds 2000 years ago, long before the antibacterial effects of alcohol were known.

The antibacterial effect of apple cider vinegar also benefits when it comes to preserving food.

So, if you want to prevent harmful infections, you can often use healthy apple cider vinegar.

Due to its acetic acid, vinegar has an antibacterial and anti-fungicidal effect that can protect against diseases. 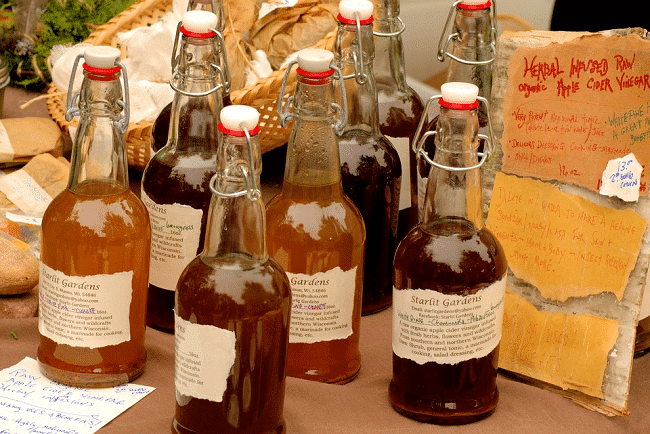 4. Is a natural home remedy for dandruff

Anyone who suffers from dandruff knows the problem. Anti-dandruff shampoos often only help for a short time. In addition, they fight dandruff with chemical ingredients.

However, many people want to largely do without these substances and are looking for natural alternatives.

With its high content of natural acetic acid, apple cider vinegar works against the harmful yeasts on the skin, which are often responsible for dandruff. Our skin, like our intestines, has a flora of various bacteria and fungi. These are very important to us and protect our skin.

However, sometimes the balance between negative and positive microorganisms is disturbed and unwanted yeasts spread. The result: scales form.

Apple cider vinegar can help to displace yeast and restore a healthy balance.

Apple cider vinegar is a good home remedy for dandruff. It fights unwanted yeasts directly on the scalp.

5. Lowers cholesterol and protects the heart

On the list of the ten most common causes of death worldwide, heart disease is in a sad first place with over 8 million deaths.

The majority of these ten causes of death can be completely avoided, especially through healthy eating and more exercise. Especially with coronary heart diseases, those affected benefit from a change in diet. As part of a healthy diet, apple cider vinegar can make a positive contribution to heart health.

Admittedly, the study situation is still quite manageable. However, there are initial animal studies showing that apple cider vinegar can help reduce triglycerides and cholesterol in the blood.

A human study showed that there is a lower risk of heart disease when using apple cider vinegar for salad dressing.

Of course, using apple cider vinegar is not enough. In order to sustainably reduce the risk of heart disease, it is important to change the diet over the long term.

Those who consume apple cider vinegar regularly show a lower risk of heart disease. In this case, however, the study situation is still relatively thin.

Apple cider vinegar is not only versatile, but it also scores with a whole range of positive effects for our health.

Not only does it help stabilize blood sugar levels and fight diabetes, but it also protects the heart and can lower the risk of a heart attack.

Apple cider vinegar can also have a positive effect on our skin. Its antibacterial effect helps with fungal skin diseases, disinfects and can even be used effectively against the cause of dandruff.

As part of a healthy diet, apple cider vinegar supports the body with its healthy effects. Already 1-2 tablespoons per day, for example as part of the salad dressing, are enough and give each salad an unmistakable note.

2020-01-24
Previous Post: 10 Signs You’re Obsessed With Your Teeth
Next Post: All You Need To Know About Body Sculpting

In 2020, a national student financial wellness survey uncovered shocking truths about college student struggles More than half of respondents showed signs of food insecurity while over 10% had experiences with homelessness Worries about food and …Read more END_OF_DOCUMENT_TOKEN_TO_BE_REPLACED