By: WellSelf Team
In: Fibromyalgia

Fibromyalgia (fiber muscle pain) is a chronic pain disorder that is sometimes referred to as fibromyalgia syndrome (FMS).

Deep muscle and joint pain in the right and left sides of the upper and lower body is how the condition is best described. The condition may be accompanied by issues relating to insomnia, fatigue, concentration problems, exhaustion, and mood swings.

A lot more females than males are affected by fibromyalgia. In the US, about 2% of the adult population suffers from fibromyalgia and the age of onset is generally at 35.

Organs, muscles, ligaments, or tendons are not damaged by fibromyalgia.

Fibromyalgia causes are largely still unknown. Triggers regarded as a root cause for fibromyalgia seem to be either a physical or emotionally stressful event.

A genetic predisposition is also suspected to be a trigger for fibromyalgia to flare up.

Fibromyalgia syndrome is not a rheumatic disease, nor is it inflammation or a disease caused by wear and tear.

According to the current state of knowledge, the central nervous pain perception is changed in those affected. Due to a lower level of perception of pain, the brain assigns disproportionately greater importance to even slight pain. The increased pain sensitivity could also be inherited. This is supported by the fact that relatives have an increased risk of being affected by fibromyalgia.

For a long time, fibromyalgia sufferers were viewed as hypochondriacs because there was no evidence of their pain. Today this has been refuted, even if psychological factors play an essential role in the development of pain. Because stress, whether in a positive or negative form, can aggravate pain.

It is known that people who have experienced severe trauma in childhood or as adults are more likely to suffer from fibromyalgia. Fibromyalgia has been associated with PTSD (post-traumatic stress disorder).

Fibromyalgia can also develop when people have other medical conditions. One then speaks of secondary fibromyalgia. The following diseases favor the outbreak: rheumatism, infectious diseases (mostly viral infections with the Epstein-Barr virus, hepatitis viruses, and HI viruses), some tumor diseases, and hormonal disorders.

Anyone suffering from fibromyalgia suffers from chronic pain and muscle tension all over the body.

Often there are also emotional complaints. The pain is usually focused on certain parts of the body and has existed for at least three months. The neck, back, arms, legs, and chest are often affected.

Those affected often react very sensitively to stimuli such as smells, cold, noise, and bright light. Fibromyalgia patients are more sensitive to pain.

A distinction is made between core symptoms, such as chronic muscle and limb pain, fatigue, difficulty falling asleep and staying asleep, and feelings of swelling, from other accompanying symptoms.

Patients with these additional symptoms have a severe form of fibromyalgia syndrome. The intensity of the complaints is not the same every day. Pain-free times are also possible.

Signs of fibromyalgia include:

Very often, it takes a very long time before patients are diagnosed with fibromyalgia as there are no specific tests that can be used to diagnose fibromyalgia.

Because of the variety of symptoms associated with fibromyalgia, it is a whole lot more difficult to identify the disease, compared to others.

There are no physical signs on the body, blood tests and x-rays also cannot provide any valuable information. These tests do, however, assist when they are used to rule out other diseases.

Diseases that present much of the same symptoms as fibromyalgia include

How is fibromyalgia diagnosed?

The main characteristic of fibromyalgia is widespread pain throughout the patient’s body and should’ve been experienced for a minimum of 3 months. Pain should also have occurred in 4 out of the 5 areas generally associated with fibromyalgia pain.

The 5 areas of the body commonly affected by fibromyalgia pain are:

Blood tests that the doctor may perform to eliminate other conditions are:

A full blood count: these tests are performed to evaluate the patient’s overall health condition and also to detect the prevalence of any other disease or condition, i.e. anemia, infection, or leukemia.

Thyroid function tests: are performed to measure how well the patient’s thyroid gland functions. The different tests are known as T3, T3RU, T4, AND TSH.

Celiac serology: is a simple blood test that helps in diagnosing celiac disease which is associated with a variety of autoantibodies found in the blood.

Vitamin D: test measures how much vitamin D is in the patient’s body. Vitamin D is an essential nutrient needed for proper growth and the formation of teeth. Medical conditions that can arise from abnormal levels include nutrition problems, bone disorders, or organ damage.

When a patient experiences a sleep disorder, like sleep apnea, an overnight sleep study may be recommended by the treating physician.

Quite often, patients may have another health issue that can coexist with fibromyalgia. The doctor may subsequently inquire if the patient also experiences any of these conditions. Typically the conditions include but are not limited to IBS (irritable bowel syndrome), TMJ (temporomandibular joint syndrome), headaches (especially migraines), painful and frequent urination, depression, anxiety, etc.

Fibromyalgia pain points are illustrated in the image below: 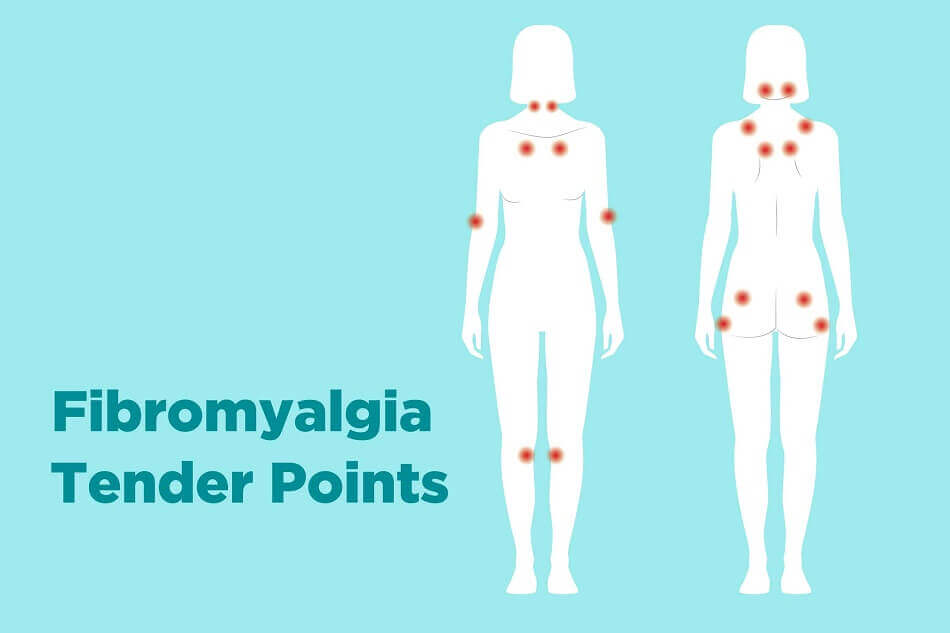 At this time, there is no cure for fibromyalgia.

As is the case with so many other diseases for which there is no cure, fibromyalgia treatment’s main focus is also the reduction of the disease’s symptoms to enhance the sufferer’s quality of life.

It is worth noting that fibromyalgia has no damaging effects on organs, muscles, ligaments, or tendons. It is therefore important for those affected to learn to live with the disease.

Depending on the severity of fibromyalgia, doctors and therapists recommend multimodal therapy with different components. Since the severity of the symptoms varies from patient to patient, it is not possible to give general tips for therapy. Each fibromyalgia disease is individual and should be treated in the same way. Patients are therefore advised to pay close attention to what is personally good for them and what is not.

2021-12-06
Previous Post: Endometriosis Treatment: Only 3 Effective Ways to Real Relief
Next Post: The Ties Between Sleep and Success

In 2020, a national student financial wellness survey uncovered shocking truths about college student struggles More than half of respondents showed signs of food insecurity while over 10% had experiences with homelessness Worries about food and …Read more END_OF_DOCUMENT_TOKEN_TO_BE_REPLACED