What Is Sinus Congestion? 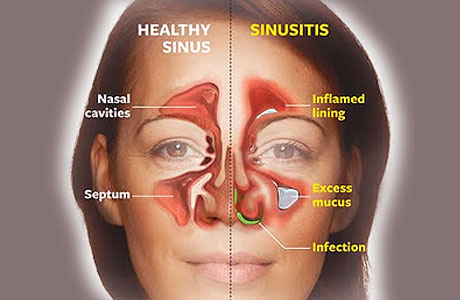 What is sinus congestion?

Sinuses are hollow air-filled cavities in the skull. Under normal circumstances, these cavities are all open to the nasal airway by means of an ostium, which is a narrow opening in the bone.

All humans have 4 pairs of these cavities which are situated in the bones of the face as follows:

The normal condition of sinuses, as mentioned earlier, is to be filled with air. Sinuses have a thin layer of soft, pink tissue called mucosa (mucous membrane) which helps to keep the inside of the nose moist. Blocked sinuses occur when these sinus linings (tissues) become swollen due to allergens, pollutants and dust which cause sinus passages to be filled with fluid; creating the ideal environment for the growth of bacteria, viruses and germs, causing sinusitis (inflammation of sinuses). Sinus congestion is thus blocked sinuses or sinusitis.

What is sinus congestion causes:

What is sinus congestion symptoms:

When to see a doctor

Can sinus infection go away on its own? Yes, but you need to seek medical attention when

In the event you feel uncertain about your health in any way, best consult a doctor. Though not the norm; untreated sinus infections may cause damage to the sinuses which could lead to more serious conditions such as ear infections, chronic sinusitis, vision loss or heaven forbid, meningitis (a serious disease in which there is inflammation of the meninges, caused by viral or bacterial infection, and marked by intense headache and fever, sensitivity to light, and muscular rigidity).

If you found this article on what sinus congestion is, useful, please spread the word…just g+1 it, like it, tweet it, pin it or share it on your favorite platform below. Thank you!

Americans have a constitutional right to bear arms, but owning a gun comes with a lot of responsibility Even gun owners with no intent to do harm can still find themselves in a difficult situation Every year, 500 people die from accidental firearm …Read more END_OF_DOCUMENT_TOKEN_TO_BE_REPLACED

Why Sanctions Against Russia May Affect the US Economy

How to Reach Gen Z in Marketing

In: Healthcare Industry
View All