By: Sonia Preiss
In: Mens Health 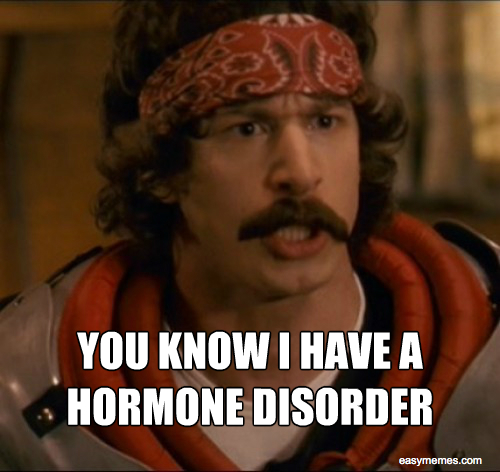 Menopause in men…are you crazy?

As a matter of fact, what is crazy is the fact that even though menopause in men dates back to the 1940’s when it was first described in medical literature, diagnosing andropause (male menopause) is still difficult. Even so, no getting away from it guys, sorry…

Menopause in men, known as andropause, basically describes a condition in aging men whereby hormonal changes cause symptoms closely resembling those in menopausal women. Merriam-Webster’s definition of andropause is “a gradual and highly variable decline in the production of androgenic hormones and especially testosterone in the human male together with its associated effects that is held to occur during and after middle age”.

Menopause in women typically occurs between the ages of 45 and 55, and is characterized by physical signs such as cessation of the menstrual cycle. In men however, “because the onset of andropause is gradual and many of its symptoms mirror those associated with medications or disease states common in the elderly, a clinical diagnosis can be difficult to make. Additionally, because of a lack of established normal testosterone levels for different age groups, as well as confusion regarding what subset of testosterone to measure, simply testing testosterone levels is inadequate.”

Because of the gradual onset of andropause it is very difficult to set an exact age at which andropause occur; suffice to say once a man in his 50’s starts to experience the andropause symptoms discussed further down, it may be time to seek medical advice.

While declining levels of estrogen cause menopause in women, declining levels of testosterone is the main culprit in men. It must be noted that both hormones are found in both men and women at different levels. Menopause refers to a hormone deficiency experienced by both sexes during the “middle” years of their life.

Testosterone is a steroid hormone which is produced in the adrenal glands (small amounts) and the testicles of men. As the principal male sex hormone, the two major functions of testosterone are:

Both of these are what make men, well, men.

So, what are the causes of low t? Due to the natural aging process, from the age of 30, the testosterone levels in men gradually decreases by about 1% annually. Once a man reaches the age of 80, most of his male hormones levels are at the same levels they were before puberty. The continuing lower levels result in physical and psychological symptoms that affect some men more than others. Many of the changes men experience are similar to those women experience during menopause. Some of the male menopause symptoms that men experience that are similar to menopause symptoms include: fatigue, depression, joint pains, hot flashes, irritability, diminished sex drive, hair loss and change in skin.

It is not general knowledge that hot flashes are one of the menopausal symptoms which men can experience also.

More and more doctors are starting to recognize and accept that this condition is contributing to the changes middle-aged men experience while going through their proverbial midlife crisis. Men are currently tested for andropause by means of a “bioavailable testosterone” test which measures the “active” testosterone level. This technology has given andropause more credence in terms of it being a legitimate clinical concern!

Andropause treatment can be very tricky. For instance, a man could be treated by his doctor for say depression with an antidepressant. If this man however suffers loss of libido, the antidepressant will only exasperate the problem.

It is recommended that men have their PSA (Prostate Specific Antigen) levels checked before deciding on testosterone replacement therapy. The PSA blood test identifies a man’s potential risk for prostate cancer. The risk of suffering a stroke, an increase in liver toxicity, or even breast development is associated with hormone supplements, especially by injection. It also stops the production of sperm. Another risk that causes concern is heart disease. The reason being the serum cholesterol and the LDL-Cholesterol levels could increase as the androgen levels increase. The risk here is coronary artery disease. It is recommended that the serum lipids are evaluated carefully and rechecked periodically.

When used for prolonged periods, testosterone consumed in oral form contains methyl testosterone which in high dosage could cause several different forms of liver damage. These include liver cancer and cholestatic hepatitis (occurs when the tiny channels that carry bile from liver cells become inflamed and blocked, preventing the bile from flowing to the gallbladder).

What are the benefits?

Men with real testosterone deficiency will most definitely improve their health and sense of wellness. Men suffering from impotence or the inability to sustain an erection unfortunately do not respond well to testosterone replacement. No evidence exists that men with borderline low levels of testosterone will improve their sexual functionality.

On a lighter note…

In 2020, a national student financial wellness survey uncovered shocking truths about college student struggles More than half of respondents showed signs of food insecurity while over 10% had experiences with homelessness Worries about food and …Read more END_OF_DOCUMENT_TOKEN_TO_BE_REPLACED