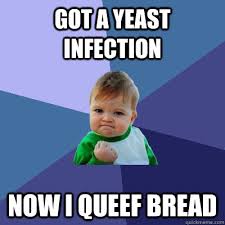 Everything you need to know about Yeast Infection in Men

Two conditions oftentimes mistaken for male yeast infection is Fordyce’s spot characterized by “small, painless, raised, pale, red or white spots or bumps 1 to 3 mm in diameter that may appear on the scrotum, shaft of the penis”

hirsuties papillaris genitalis (commonly known as pearly penile papules or hirsuties coronae glandis) which “appear as one or several rows of small, pearly or flesh-colored, smooth, dome-topped bumps situated circumferentially around the corona or sulcus of the glans. They may range in size from less than 1 mm to 3 mm”

Source: http://en.wikipedia.org/wiki/Hirsuties_coronae_glandis). Neither of these conditions is harmful.

Yeast infection in men can sometimes go unnoticed for months; even years when there are no visible signs or symptoms. This means that once the symptoms associated with penile yeast infection start to manifest, they can cause extreme discomfort and need to be treated as a matter of urgency.

Symptoms typically are as follows:

Signs of penile yeast infection are:

Is there any way to determine the presence of yeast infection?

Whilst most of the over the counter test kits for yeast infection is aimed at women, a candida saliva test can be performed by both males and females in the comfort of their home.  Bear in mind this is not the most reliable method; rather see it as a way to determine if you should consult a doctor. I recommend you do the yeast infection test as described below; then either try some of the treatments discussed in this article or consult your doctor. Most home remedies are generally safe to use and it may just get rid of your yeast infection.

“As soon as you awaken in the morning spit two times into a glass of water, and leave it alone for about 15 minutes. If you notice that the spit simply dissolves into the water and eventually disappears, then you definitely don’t have the male yeast infection. However, if the spit turns cloudy, and sinks and settles at the bottom of the glass, making spidery forms and string like shapes, then you probably have the male yeast infection”

Natural unsweetened yogurt is quite a popular home remedy when looking for fast relief from the pain and discomfort associated with yeast infection. Use the yogurt topically on your penis for at least an hour. Due to the messiness of this remedy, the best time is at bedtime. Cover with a soft cloth and wash off in the morning. Eat natural yogurt daily as a preventative measure.

Lemon juice contains vitamin C which helps to restore the pH balance of the body. Yeast overgrowth disturbs the balance which results in yeast infection. Prepare a solution by stirring 2 tablespoons of lemon juice into 1 quart of warm water. Soak the affected area in the solution.

Drinking cranberry juice (unsweetened) twice daily will not only assist in clearing up the symptoms of penile yeast infection by restoring pH levels, but it also is a great way in keeping yeast infection at bay.

Honey (also considered a mild laxative for constipated people) can be applied topically for about 20 minutes after which it is washed off. It is vital to dry the infected area well.

Aloe vera gel’s antifungal properties are great for soothing relief from the itching associated with male yeast infection. Just apply raw aloe vera gel to the affected areas and let it do its magic. Diligent application will soon get rid of yeast infection.

Organic virgin coconut oil will not only stop symptoms like itching, burning and irritation when applied directly to the affected area(s) 3-4 times daily, it will also assist in healing any scratches or cracks which may be a consequence of yeast infection.

For more effective results use coconut oil internally as well, “working up to consuming about three tablespoons of coconut oil daily. It’s best to start with one teaspoon per day and then work up to the full amount. The more severe the candida, the slower you should work up to this number to prevent overwhelming die-off symptoms as excess yeast is killed off. These symptoms are flu-like and include headaches, chills, and fatigue. They will normally last about 3-5 days, depending on the severity of your candida.”

Try stirring some into your oats or use it as a substitute for cooking oil when preparing meals or for butter on toast.

Over the counter treatment for male yeast infection which seems to have worked well is Monistat, a vaginal cream probably developed to treat yeast infection in women. For faster results add a few drops of white vinegar to a small blob of cream before applying it to the affected areas on your genitals twice daily (NEVER use straight vinegar, it WILL eat through the skin!).

Basically, any medicated cream which contains miconazole or clotrimazole can be used. Make sure to use only as directed.

Diligent use should clear up most of the yeast infection symptoms in about 7 days; some people experienced results in as little as 3 days.

In conclusion: While treating male yeast infection it is imperative to wash and dry well the affected areas before applying your remedy of choice. Use any remedy only as directed and make sure to wear clean underwear daily.

Warning: When treatments do not bring about any relief from yeast infection symptoms, the yeast infection may be associated with another underlying chronic medical condition, namely HIV or diabetes. These conditions need to be addressed before any treatment to cure yeast infection will work. Professional advice must be sought when at all in doubt.

On a lighter note…

Two five-year-old boys are standing at the potty to pee. When one says

” Your thing doesn’t have any skin on it!”

“It means they cut the skin off the end.”

” How old were you when it was cut off?”

Let us know what you think guys! Show you care and share which remedy worked best for you…Let’s together build a list of remedies that actually work…